Kobe Bryant finishing his career on a monster offense by scoring 60 point against the Utah Jazz to lead the Lakers to a 101-96 win.

Kobe scored 17 of the final 21 points of the Lakers while providing the assists on the other 4 points. Kobe made the go ahead jumper shot with 30 seconds remaining.

Kobe spoke after the game for the final moment and the most memorable one says “Mamba out,”.

Even Lebron has respect for Kobe’s 60 points

I can’t say the 60 points upstaged the Warriors 73 wins, let us just focus on the 60 Magic

Who would've thought that Kobe scoring 60pts in his last game would upstage the Warriors winning their 73rd game? Well it happened tonight!

This one is nice and one of the best inspiration for Kobe, which is to be able to show his kids his game, leaving a lasting great game memory

Kobe said the coolest part of hitting 60 was that his kids were here and got a glimpse of what kind of player he used to be.

Can’t help but put Michael Jordan in the conversation

He's the oldest player ever with 60. pic.twitter.com/zHVe7vRI68

Congratulations and thank you Mamba! 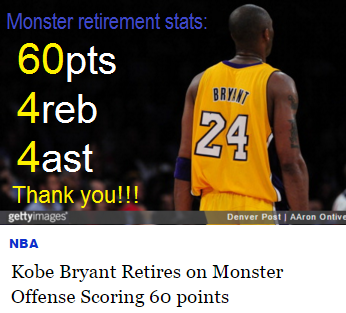 Kobe Bryant is a Devout Catholic and hours before his death he was seen attending Mass. Father Sallot confirmed he